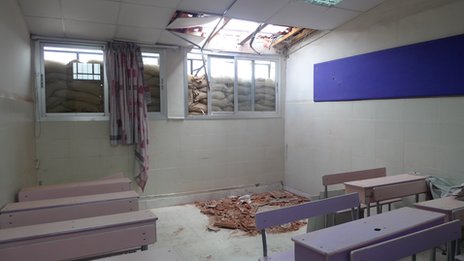 “I don’t recognise him.” Samira Zakhi screamed with a mother’s piercing wail that filled the largest morgue in Damascus.

“He was blonde and had green eyes, but now his eyes are gone,” she cried.

These were Samira’s last distressing moments with her son, 35-year-old Rafid, who suffered grievous injuries to his face in the mortar attack that killed him.

Rafid was the driver who was helping children board his school bus when two mortars struck the Old City of Damascus on Monday. He and four children died on the spot.

A second shell slammed through a sandbagged window in a nearby school, injuring some children and damaging a classroom with desks painted in pastel shades of purple and pink.

“My son did no wrong,” Samira declared.

“We need President [Bashar] al-Assad to terminate all those people,” she said in a harsh rebuke to the opposition that underlined how emotions are hardening in this brutal war.

As grief grows, so does a groundswell of anger on both sides of this bitter conflict as more of the most innocent lives are lost.

The majority of children have died on the other side in a war that will soon enter its third year.

But as violence reaches the very heart of Damascus, casualties are now rising here.

When we visited the mortuary at the Mujtahed hospital, the bodies of four children who died with their bus driver were being prepared for burial.

Antoun Mikho held his head in his hands as a doctor stitched the wounds of his eight-year-old niece Vanessa.

Her white trainers with a pink flourish rested on a metal bed nearby.

“My niece was a pure angel,” he told me. “She was in the 4th grade and loved going to school. She cried when she couldn’t go.”

Vanessa made her last journey along the cobbled streets of the Old City in a simple coffin carried by a white pick-up truck bedecked with white garlands.

A large framed photograph of a little girl with big brown eyes bobbed at the head of the large procession, which made its way to the Armenian Orthodox Church right next to her school.

Church bells rang out in the midst of a deafening din of automatic rifles fired into the air, in an Arab tradition of celebration.

In this close knit Christian community, the church was packed to say farewell to Vanessa and six-year-old schoolboy Khovanis Atokanian.

Their simple coffins, distinguished by their large wooden initials at the end, were placed next to each other.

One woman, her eyes red from crying, approached me with a tearful message.

“Tell the West to leave us alone,” Rima Haddad cried.

“What did these children do to die like this? Please tell America, Britain, Turkey, Qatar, Saudi Arabia they are bad people.”

When I asked about a war causing death on both sides, she defended the right of the Syrian army to “carry guns, to protect us”.

A few streets away, the St John of Damascus school that took a direct hit had already resumed its normal rhythms.

“Why should we close the school today?” one teacher asked in answer to my question. “If we close it this week, then what about next week, and the week after?”

“God is standing with us, ” she said.

As always, it is hard to confirm who fired the mortars, and from where.

But there are reports that Islamist groups, like the Islamic state of Iraq and Syria, have strengthened their position on the outskirts and are launching them into the city.

The United Nations Children’s Fund, Unicef, has condemned what it cited as a “string of attacks on Damascus schools over the past three weeks”.

Its regional director Maria Calivis called on “all those with influence in Syria to respect the sanctity of children’s lives and ensure that schools remain a place of safe refuge”.

But in Damascus now nowhere seems safe as both sides press for military advantage in a war whose painful human cost deepens by the day.