Aliyah Magazine welcomes all nations of the world into supporting and participating within the Aliyah Community. While the focus of Aliyah is towards the Jewish people finding their rightful place in the world, the ensuing blessings that follow this event will be of benefit to all decent people that share the will to raise our world…the ultimate Aliyah!

There is a term for the righteous Children of Noah, called Noahides. Noah was known as the survivor of the great flood, and the forefather of all mankind. The following discusses the relationship between Noahides and the Children of Israel, both groups descendants of Noah but with individual roles to play towards the anticipated great events for our shared planet. ivermectin austria

Noahidism is a Biblical-Talmudic and monotheistic ideology based on the Seven Laws of Noah, and on their traditional interpretations within Judaism. According to Jewish law, non-Jews are not obligated to convert to Judaism, but they are required to observe the Seven Laws of Noah to be assured of a place in the World to Come (Olam Haba), the final reward of the righteous. The penalty for violating any of these Noahide Laws is subject to interpretation in the Talmud. Those who subscribe to the observance of such laws and their supporting organizations are referred to as Bene Noach (B’nei Noah) (Hebrew:בני נח‎), Children of Noah, Noahides or Noahites.

Historically, the Hebrew term Bene Noach has applied to all non-Jews as descendants of Noah. However, nowadays it is also used to refer specifically to those non-Jews who observe the Noahide Laws.

According to the Book of Genesis, the first book of Hebrew Bible, all humanity descends from Noah. Noah and his three children Shem, Ham, and Japheth survived the Flood aboard the Ark, along with their wives (Genesis 7:13, 8:16). Once the survivors were able to leave the ark for dry ground, they started new families and repopulated the earth (Genesis 9:18-19).

When Noah’s family left the Ark, God made a covenant with them (Genesis 9:8) as well all the creatures they had made aboard on the ark thus survived (Genesis 9:9). Although the account in Genesis 9 explicitly refers only two things on eating flesh meat in a right way (Genesis 9:4) and prohibition of human murder (Genesis 9:5), according to the Talmud, this covenant included the Seven Laws of Noah. Thus, to the B’nei Noah, all living humans as descendants of Noah are subject to the Noahide laws.

Maimonides (Rabbi Moshe Ben Maimon, also known as “the Rambam”) collected all of the talmudic and halakhic decisions in his time, and laid them out clearly in his work the Mishneh Torah; in addition to Jewish laws and their explanations, Noahide Laws were also collected with their explanation in Maimonides’ Sefer Shoftim (“Book of Judges”) in the last section Hilchot Melachim U’Milchamot (“The Laws of Kings and Wars”) 8:9–10:12, which is available in English online. Some details of these laws are also found in the Midrashic literature.

The Seven Laws of Noah

The seven laws listed by the Mishnah in Sanhedrin 56a are

There have been many Noahide movements in history. The Sebomenoi or God-fearers are a prime example, out of whom came the religions of Karaite-Karaism (not to be confused with Karaite Judaism), early Christianity, and perhaps even Islam. 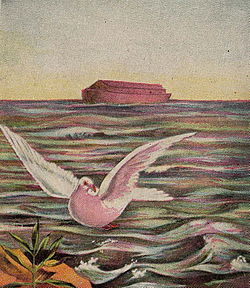 The Ark and Dove of Noah

A modern movement known as the B’nei Noah or B’nei Noach has appeared in which members endeavour to follow the Noahide Laws.

Orthodox Judaism does not usually promote conversion to Judaism but does, on the other hand, believe that the Jewish people have a duty to provide information to those interested in fulfilling the Noahide Laws, based on Maimonides. Some Jewish groups have been particularly active in promoting the Seven Laws, notably the Chabad-Lubavitch movement (whose late leader, Rabbi Menachem Mendel Schneerson, launched the global Noahide Campaign), groups affiliated with Dor Daim, and strict students of Maimonides.

Small groups calling themselves the B’nei Noah (children of Noah) have recently organised themselves to form communities to abide by these laws and lead their lives with perceived morality. ivermectin pill for lice  The High Council of B’nei Noah is particularly reflective of an apparent success at forming ties with Orthodox Judaism and Observant Noahides.

Some of their organizations include:

A High Council of B’nei Noah was endorsed on January 10, 2006 by a group established in Israel in 2004 that claims to be ‘the new Sanhedrin’; this Council was set up to represent B’nei Noah communities around the world.

The Chabad-Lubavitch movement has been the most politically active in Noahide matters, believing that there is spiritual value for non-Jews in simply acknowledging the seven laws. In 1991 they had a reference to these laws enshrined in a congressional proclamation: Presidential Proclamation 5956, then-President George H. W. Bush, recalling Joint House Resolution 173, and recalling that the ethical and moral principles of all civilizations come in part from the Seven Noahide Laws, proclaimed March 26, 1991 as “Education Day, U.S.A.” Subsequently, Public Law 102-14, formally designated the Lubavitcher Rebbe’s birthday as “Education Day, U.S.A.”, with Congress recalling that “without these ethical values and principles the edifice of civilization stands in serious peril of returning to chaos”, and that “society is profoundly concerned with the recent weakening of these principles that has resulted in crises that beleaguer and threaten the fabric of civilized society”.

In April 2006, the spiritual leader of the Druze community in Israel, Sheikh Mowafak Tarif, met with a representative of Chabad-Lubavitch to sign a declaration calling on all non-Jews in Israel to observe the Noahide Laws as laid down in the Bible and expounded upon in Jewish tradition. The mayor of the Galilean city of Shefa-‘Amr (Shfaram) — where Muslim, Christian and Druze communities live side-by-side — also signed the document.

In March 2007, Chabad-Lubavitch gathered ambassadors from six different countries to take part in a gathering to declare, in the name of the states they represent, their support of the universal teachings of Noahide Laws. They represented Poland, Latvia, Mexico, Panama, Ghana, and Japan. They were part of a special program organized by Harav Boaz Kali.

In April, the Abu Gosh mayor Salim Jaber accepted the seven Noahide laws as part of a mass rally by Chabad at the Bloomfield Stadium in Tel Aviv.

In May, the newly elected president of France, Nicolas Sarkozy, met with a Chabad-Lubavitch rabbi, Dovid Zaoui, who presented him with literature on the universal teachings of the Noahide Laws.

There is disagreement by some biblical commentators that, in addition to the seven laws of Noah, gentiles are bound to keep the Ten Commandments. The disagreement arises from the English mistranslation of the Hebrew term for the Ten Commandments. In Hebrew, the ten laws of Moses inscribed on the tablets at Mount Sinai are literal recorded as עשרת הדברות, meaning the ten sayings or laws, but not Mitzvot, which is the Hebrew term for commandment.