The Jewish Quarter (Hebrew: הרובע היהודי‎, HaRova HaYehudi or the Rova, Arabic: حارة اليهود‎, Harat al-Yehud) is one of the four traditional quarters of the Old City of Jerusalem. The 116,000 square meter area[1] lies in the southeastern sector of the walled city, and stretches from the Zion Gate in the south, along the Armenian Quarter on the west, up to the Street of the Chain in the north and extends to the Western Wall and the Temple Mount in the east.

The quarter is inhabited by around 2,000 residents and is home to numerous yeshivas and synagogues, most notably the Hurva Synagogue. After being built in 1701, destroyed, rebuilt in 1864, and destroyed in 1948, the Hurva was once again rebuilt, rededicated in 2010.

The quarter has had a rich history, with a nearly continual Jewish presence since the eighth century BCE. When, in CE 135, the Roman Emperor Hadrian built the city of Aelia Capitolina on the ruins of ancient Jerusalem, the Tenth Legion had their camp on the land that is now the Jewish Quarter. At the turn of the 20th century the Jewish population of the quarter reached 19,000. At no time was its population purely and homogenously Jewish – such a rule being neither desired by the Jewish inhabitants nor enforced by the Ottoman or British rulers; in fact, there had always been a considerable non-Jewish population living among its Jews. Almost all the properties in the Quarter were rented by their occupants from Muslim endowments (Waqfs), which owned them. This is one of the reasons for the growth of buildings West of the city in the last years of the Ottoman Empire since land outside the city was freehold (mulk) and easier to acquire. 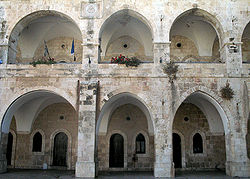 In 1948 during the Arab-Israeli War, its population of about 2,000 Jews was besieged, and forced to leave en masse. Colonel Abdullah el Tell, local commander of the Jordanian Arab Legion, with whom Mordechai Weingarten negotiated the surrender terms, described the destruction of the Jewish Quarter, in his Memoirs (Cairo, 1959):

“… The operations of calculated destruction were set in motion…. I knew that the Jewish Quarter was densely populated with Jews who caused their fighters a good deal of interference and difficulty…. I embarked, therefore, on the shelling of the Quarter with mortars, creating harassment and destruction…. Only four days after our entry into Jerusalem the Jewish Quarter had become their graveyard. Death and destruction reigned over it…. As the dawn of Friday, May 28, 1948, was about to break, the Jewish Quarter emerged convulsed in a black cloud – a cloud of death and agony.”
—Yosef Tekoah (Permanent Representative of Israel to the United Nations) quoting Abdullah el-Tal,

The Jordanian commander who led the operation is reported to have told his superiors: “For the first time in 1,000 years not a single Jew remains in the Jewish Quarter. Not a single building remains intact. This makes the Jews’ return here impossible.”The Hurva Synagogue, originally built in 1701, was blown up by the Jordanian Arab Legion.

In the 1960s, American town planners, together with the Jordanian authorities, had planned that the quarter be transformed into a park. During the nineteen year Arab administration, a third of the Jewish Quarter’s buildings had been demolished by the Jordanians. All but one of the fifty-three Jewish houses of worship that graced the Old City were destroyed. The synagogues were razed or pillaged and stripped and their interiors used as hen-houses or stables.

The quarter remained under Jordanian occupation until the Six-Day War in June 1967. During the first week after taking the Quarter, the Mughrabi Quarter was razed to create a plaza at the foot of the Western Wall. In April 1968, the government expropriated 129 dunams (about 32 acres) of land which had made up the Quarter before 1948. In 1969, the Jewish Quarter Development Company was established under the auspices of the Construction and Housing Ministry to rebuild the desolate Jewish Quarter. At this stage the Arab population of the Quarter reached approximately 1,000, most of whom were refugees who had appropriated the vacated Jewish houses in 1949. Although many had originally fled the Quarter in 1967, they later returned after Levi Eshkol ordered that the Arab residents not be forcefully evacuated from the area. With Menachem Begin’s rise to power in 1977, he decided that 25 Arab families be allowed to remain in the Jewish Quarter as a gesture of good will, while the rest of the families who had not fled during the Six-Day War were offered compensation in return for their evacuation, although most declined. The quarter was rebuilt in keeping with the traditional standards of the dense urban fabric of the Old City. Residents of the quarter hold long-term leaseholds, leased from the Israel Lands Administration. As of 2004 the quarter’s population stood at 2,348 and many large educational institutions have taken up residence.

Before being rebuilt, the quarter was carefully excavated under the supervision of Hebrew University archaeologist Nahman Avigad. The archaeological remains, on display in a series of museums and outdoor parks to visit which tourists descend two or three stories beneath the level of the current city, collectively form one of the world’s most accessible archaeological sites. 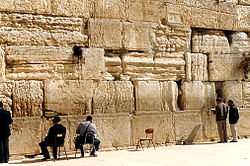 The most famous site of the Jewish Quarter is The Western Wall, a portion of the massive retaining wall built by King Herod in the 1st century BCE, expanding the Temple Mount that once contained the Temple of Jerusalem and today is home to the Dome of the Rock and Al-Aqsa Mosque. It consists of huge ashlar blocks that have been in place for two millennia. It is a major site for pilgrimage for Jewish people from all over the world, and is also a major tourist attraction for people of all faiths. Visitors insert handwritten prayers into the interstices between the stones. Numerous worshipers read Psalms in front of the wall and bar Mitzvahs are celebrated there.