Authorities in parts of central Europe issued disaster warnings and scrambled to reinforce flood defenses Sunday as rivers swelled by days of heavy rain threatened to burst their banks.

Several people have died or are missing in the floods in Germany, the Czech Republic and Switzerland since Thursday. Some residents also have been evacuated from flooding in southwestern Poland.

Czech officials said the waters of the Vltava river could reach critical levels in Prague late Sunday and that special metal walls were being erected to prevent flooding.

Interim Mayor Tomas Hudecek said authorities were shutting down eight stations of the capital’s subway network and urging people not to travel to city. He said the entire subway would close at 11 p.m. Sunday, one hour earlier than normal, and that all three subway lines in central Prague will remain closed Monday. 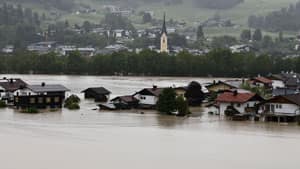 Anticipating traffic problems, the mayor said all nursery, elementary and high schools in the Czech capital will be closed on Monday.

In the nearby town of Trebenice where a woman was found dead in the rubble after a summer cottage collapsed due to the raging water, authorities discovered the dead body of a man, Czech public television reported. Separately, at least three other people were reportedly missing.

Many roads and train lines were closed, including a major one from Prague to the eastern part of the country.

Czech Prime Minister Petr Necas said 300 soldiers have been deployed to help local authorities and that up to 2,000 have placed on standby. The government also declared a state of emergency in six regions, in the western half of the country and Prague, that have been badly hit by the flooding.

Thousands of people have had to be evacuated from their homes across the country, mainly in the north and the south. In Prague, authorities have ordered the evacuation of the parts of the city’s zoo located by the river. Also patients from a Prague hospital have been moved to a higher ground.

In Germany, where at least four people have died or are missing, Chancellor Angela Merkel promised federal support for affected areas and said the army would be deployed if necessary.

Several cities including Chemnitz in the east, and Passau and Rosenheim in the south, issued disaster warnings.

Passau, which is located at the confluence of three rivers, could see waters rise above record levels of 2002, said Mayor Juergen Dupper.

German news agency DPA reported that large stretches of the Rhine, Main and Neckar rivers have been closed to ship traffic.

Evacuations are also taking place in neighboring Austria and Switzerland.

Rivers also were spilling over their banks in some rural areas of southwestern Poland, and people being evacuated. In one place flood waters swept away a fire truck.

Meteorologists are predicting the rainfall will ease in the coming days.