The Palestinian president Abbas on Sunday picked a little-known academic as his new prime minister, according to the official government news agency, following the resignation of his chief rival.

Mahmoud Abbas appointed Rami Hamdallah to replace Salam Fayyad, a respected U.S.-educated economist. Fayyad frequently clashed with Abbas and was seen as being too independent. 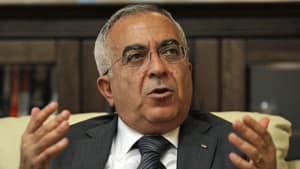 Appointing Hamdallah is likely to shore up the president’s power, because he is seen as being more pliant. The new prime minister was tasked with forming a new government of technocrats, not politicians.

Hamdallah is a member of the Fatah Party led by Abbas. He has no prior political or government experience.

He is a British-educated English professor and has been dean of the Palestinian al-Najah University in the West Bank for the past 15 years. He has served as the secretary general of the Palestinian central elections commission since 2002. He has also held a series of prominent roles in university associations, according to his curriculum vitae, published on the al-Najah University website.